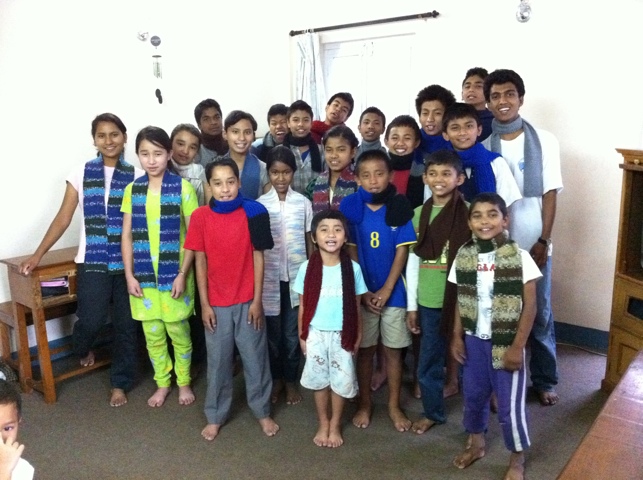 Well we are in Nepal again and it has been another wonderful trip. We had great flights on Qatar Airlines (definitely recommended if flying in this part of the world) and it was only 26 hours of flight time which was the shortest of the three trips we have made over here. If anyone knows anything about Nepal they know that the government has “challenges” which is an understatement. There is going to be a bandh tomorrow and Monday which is where groups of people that are protesting the current government shut down the city traffic and force all the shops in the city to close down. We have really been working hard to get the majority of our shopping for orphanage supplies done the first couple of days to avoid the shutdowns around the city. So far for me this trip has been about perspective and my life back in the states. Everyone in the US will admit that the past few years we have undergone some pretty serious problems with our economy and just the government fighting and not getting a lot done no matter if you are democrat or republican. Here, it is just absolutely insane. The country has 7 days left to write and ratify a constitution for all the people, and opposing people groups are shutting down entire cities because they don’t like what is going on. The people here live in abject poverty yet these party’s find time to strike and not make income to support their families and the government in general. Things like this would NEVER happen in America and it is something that helps me be thankful for what we do have back home. What we have is not a perfect system but we don’t have the level of disorganization like what is happening over here every day.
It was also refreshing to go to an all Napoli church today and not understand a blessed thing that was said except for “Jesus” occasionally. 🙂 It helped me to gain a perspective of/for people who come to my home church who don’t speak English and how they feel. I can now understand that there would definitely be a greater emphasis on the worship/music because they could recognize the melody and sing the songs in their language.
The passion that people have for God in church is so unreal. I do believe that the US church has people who genuinely love God, but when the church here gets done singing an old 80’s song like “Lord I Lift Your Name On High” and then break into open worship for about 5 solid minutes it is no contest in comparison with America. I have always wondered what the difference is from foreign lands to America and I really feel it has to do with distractions and not quieting ourselves and letting God reveal himself in deeper ways. We get distracted with things we can’t control (work, sickness, family issues, etc) but also with things we can control (tv, music, entertainment, etc) It is so refreshing to get re-calibrated over here as well as spending time with these kids we love so much.
Tonight we get to buy the kids pizza and play some games with them. With all the crap going on with the government the next couple of days we get to spend more time with the kids because they will not be in school so that is one plus. More updates to come!