The Short But MIGHTY Phrase 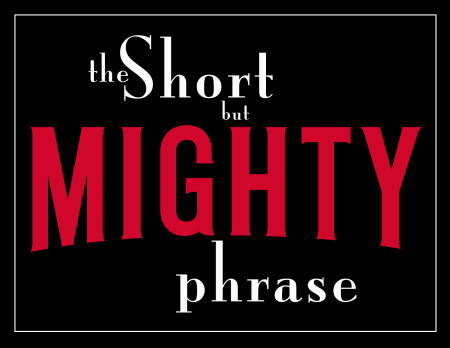 I felt the full gravity today of thanking the person that helps manage the property for our television station. I could tell when I first met her that she deals with more than her fair share of negative words and attitudes with tenants and people telling her that crap is broken and for her to drop everything and assist them.

We had some leaks that have existed in our portion of the building even before we moved in. The church that used to own the building we lease in had done everything in their power to try and help get the leaks fixed but it always ended up with water pouring in everywhere. When the new company took over our lease, we contacted the lady who was the asset manager and asked them to fix the leaks in our area. After a few phone calls back a forth, they brought out a roofing specialist and they made the appropriate repairs that have been working great for probably two weeks.

I decided to give our property manager a call and thank her for their company fully fixing our leaks and preserving the electrical equipment that we have stored all over our office. It was funny because when I called her she didn’t really know how to respond at first. I told her I was sure that 99% of the phone calls she receives are negative in nature and can be wearing on her. I told her I wanted to encourage her and thanked her for her help. I could hear her voice loosen and she said that I made her day. I am not sure if she is a follower of Jesus but from my simple thank you I have gained entrance into her life just from being grateful.

Then I thought of the verses in Luke 17:11-19 where it says that Jesus healed 10 lepers and only ONE came back to thank him.

11 Now on his way to Jerusalem, Jesus traveled along the border between Samaria and Galilee. 12 As he was going into a village, ten men who had leprosy[a] met him. They stood at a distance 13 and called out in a loud voice, “Jesus, Master, have pity on us!”

14 When he saw them, he said, “Go, show yourselves to the priests.” And as they went, they were cleansed.

15 One of them, when he saw he was healed, came back, praising God in a loud voice. 16 He threw himself at Jesus’ feet and thanked him—and he was a Samaritan.

17 Jesus asked, “Were not all ten cleansed? Where are the other nine? 18 Has no one returned to give praise to God except this foreigner?” 19 Then he said to him, “Rise and go; your faith has made you well.”

Verse 17 gives such an interesting response from Jesus before he tells the man to rise and go. He mentions the nine other lepers that had the same condition of this man but did not come back to find Jesus and thank him. I wonder if this portion of scripture is here to remind us of the importance of a thank you? Or is it an example of being obedient to the urging of God when thanking people in your life and not looking for an equally generous response? I think it was a bit of both.

You can NEVER underestimate the power of a simple thank you. Thinking of all the things that Jesus endured while here on the earth and the countless stories of his power moving in people’s lives, there are very few examples of people actually saying thank you.

Think today about your life and if people around you would consider you a grateful person. Is there someone in your life that you need to thank for something they did or they do on a consistent basis? I have heard many people say, “That person knows I appreciate them. Why do I have to say anything?” Verbalizing a thank you is not only for encouraging a person, but it is also for you to hear yourself appreciating those around you.

Your words have power to speak life or death and a simple thank you is the best example of life-giving power in someone else’s AND your own life.