My FAVORITE paragraph from Holy Crap! 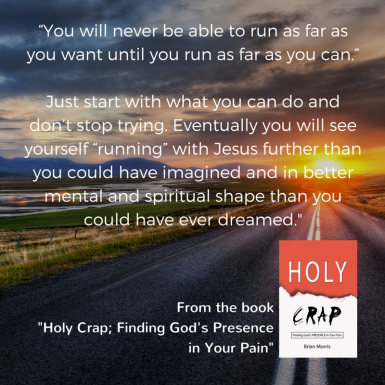 There are so many sections of the “Holy Crap” book I enjoy, but this paragraph from Chapter one is probably one of my favorites.

From Chapter One: Holy Crap! This Book is for Everyone! (electiopublishing.com)

“I started running a few months ago and had a small “revelation” about people who don’t think they can run extended distances. Someone asked me about being able to run and he said, “I could never run that far and not pass out.” I told him “you will never be able to run as far as you want until you run as far as you can.” It was so weird because it just came out of my mouth and has ended up being an encouragement to myself in all areas of my life, including my relationship with Jesus. Just start with what you can do and don’t stop trying. Eventually you will see yourself “running” with Jesus further than you could have imagined and in better mental and spiritual shape than you could have ever dreamed.”

I love this section so much because it is really the essence of Holy Crap; DON’T EVER GIVE UP. I know it’s not easy to get up one more day when you are going through crap. I understand the thoughts of feeling like you are reliving the same nightmare day after day with no hope or end in site. I am not saying this and thinking that everything will instantly get better but just asking you to do one thing. Do what you can do today and keep going.

Praying for you and cheering you on.